Last week I wrote about one of the best trade deadline acquisitions in MLB history. CC Sabathia to the Milwaukee Brewers in exchange for four prospects to the Cleveland Indians which occurred back in 2008. A trade which singlehandedly led Milwaukee to their first playoff birth in 26 years.

During that same year the Chicago Cubs made a trade for a big name pitcher at the deadline. That pitchers name was Rich Harden. One day after Milwaukee landed Sabathia from the Indians, the Cubs traded outfielders Matt Murton, Eric Patterson, RHP prospect Sean Gallagher, and Josh Donaldson (who was a catching prospect at the time).

Murton had been a decent outfielder for Chicago for a few years posting a career .294 batting average in 870 At-Bats with Chicago. Patterson played in 226 MLB games and batted .217 for his career. Gallagher (who was the big fish of the trade at the time) pitched in 91 MLB games and posted a 5.64 ERA. And well of course,  Josh Donaldson, who was drafted in the first round of the 2007 draft by Chicago, would go on to be one of the best third baseman in the game. He won the 2015 AL MVP award and has two Silver Slugger awards to his name.

Harden was great for the Cubs in 2008 Posting a 5-1 record and a 1.77 ERA in 13 starts. He also faltered in his one playoff game just like Sabathia, allowing 3 earned runs in 4.1 innings. The Cubs faced the Dodgers in the NLDS and were eliminated. Harden’s contract ran through the 2009 season unlike Sabathia’s which immediately expired after the 2008 season. Harden went 9-9 that season with a 4.09 ERA as the Cubs only achieved a 83-79 record that season.

Murton only played in 9 games for the Athletics in 2008 and then finished his career in Colorado the next season. Donaldson however became Oakland’s best player. In his four seasons in Oakland Donaldson hit .268 and hit 63 Home runs and drove in 228 RBI’s. He led Oakland to the playoffs in three straight seasons until he was traded to Toronto in winter of 2015.

Oakland received SS prospect Franklin Barreto, RHP Kendall Graveman, LHP Sean Nolin, and third baseman Brett Lawrie in exchange for Donaldson. Lawrie had been a key piece to the future of the Blue Jays after being acquired from Milwaukee in the Shaun Marcum deal in 2011. He had battled several injuries throughout his four year tenure with Toronto and had been very hot headed in his time there which could be a reason he was traded.

Oakland got one year out of Lawrie before shipping him to the White Sox in 2016. He batted .260 and hit 16 Home runs and had 60 RBI’s for Oakland. Oakland received two pitching prospects, LHP Zack Irwin and RHP J.B. Wendelken. Neither of which have made it to the MLB yet.

Nolin appeared in 6 games for Oakland before being claimed off waivers by Milwaukee in 2016. Nolin has not pitched in the majors since 2015. Graveman has been a decent 4 or 5 starter for Oakland posting a 16-20 record with a 4.09 ERA in his two year tenure with them. Barreto remains in Oakland’s farm system as a 20 year old in AAA Nashville and has posted very good numbers in the minor leagues.

All of these acquisitions were started by the Cubs acquiring Rich Harden from Oakland. Four teams are heavily effected by this one deal nearly nine years later. The White Sox, Cubs, A’s, Blue Jays, and Brewers. The tree is still branching off given the most recent prospects in Oakland’s system so it is too early to tell who truly got the best of this situation. 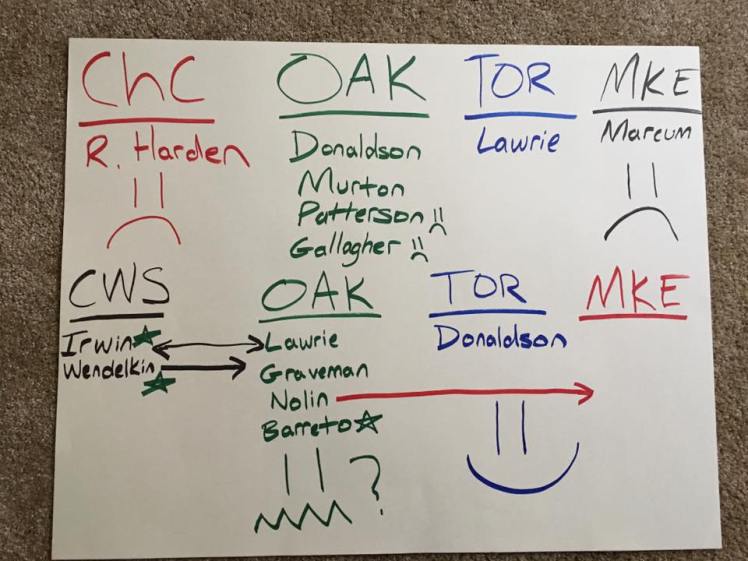