The NHL playoff format has really come into question this season. Many teams who have had excellent seasons are not getting favorable matchups in the first round. For example, as it stands today, the top 3 Atlantic division teams are all better than the top 3 Metropolitan teams. The idea of the new playoff format is to get rivalries going in the first round to get people watching.

(This can seem very biased coming from a Leaf fan who is inevitably about to be screwed by this format. But I swear I have been on this train since the day this format was implemented.)

The old system wasn’t perfect by any means either however. The top three teams in each conference were the three division leaders regardless of other teams finished ahead of them points wise. I am proposing that the NHL goes to a simple 1-8 system like the NBA does. I’d like to see it implemented by at least 2020 when Seattle comes to be.

In the NBA, there is no reward for winning your division, which I am in favor of. If you ask me, the NHL should eliminate divisions and just run with 16 teams per conference. That would more than likely cause some scheduling issues however, so I don’t think that will ever happen. If the NHL could at least transfer to how the NBA runs their playoffs I would be ecstatic. The NBA usually has fantastic conference final series’ followed by a very entertaining final series. The best teams always seem to make deep playoff runs in the NBA and I think that is great for the league.

I do understand that hockey and basketball are completely different sports. In basketball you can have two or three guys who can completely take over a game and lead their team to a win. In the NHL you need a much better supporting cast around your star players (see Connor McDavid on the Oilers). My point is, the NHL is a more balanced league than the NBA is, and it could be harder for higher seeded teams to make deeper runs in the playoffs. 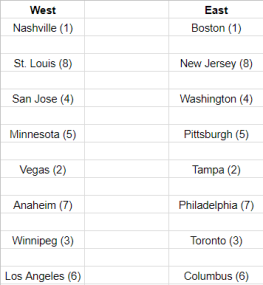 Listed above is how the playoffs would begin if the regular season ended today. On the left is the current format and on the right is my proposed format. The Western Conference doesn’t change too dramatically. The Eastern Conference is completely changed however. Teams such as Tampa and Toronto have a much more favorable matchup in the first round. They are the best regular season teams and should have an easier path than they do in the current format.

I fail to see the appeal in having some of the leagues best teams being knocked out in the first round. Start stacking the teams up 1-8 as soon as possible.