I am absolutely livid about this Fernando Tatis Jr./Texas Rangers situation. During last nights game between the Padres and Rangers, Tatis came to the plate with the bases loaded in a 10-3 baseball game in favor of Tatis’ Padres. Tatis worked a 3-0 count and sent the next pitch to the moon. Why is this a big deal? The “unwritten rules” of baseball frown upon “showing up” the other team.

There are so many things about this that drive me all of the way up the wall. First of all, aren’t we playing baseball at the highest possible level? Are we really asking guys to take at-bats off now? Don’t they get paid life changing amount of money to perform at the highest level? If not, maybe we should put a mercy rule in so no one gets their feelings hurt when the game gets “too out of hand”.

Since when is swinging on 3-0 against the rules? I played at a relatively high level of baseball and almost all of my coaches gave us the green light on 3-0. Odds are you are not going to see a better pitch to hit on 3-0. Not swinging on 3-0 is such an old school way of thinking that absolutely needs to go away.

Here’s an idea for the Rangers, don’t go down 3-0 in the count to one of the leagues brightest young stars with the bases loaded. Better yet? Don’t throw an absolute muffin over the middle of the plate that’s destined to have a new zipcode by the time it lands.

Then you throw at the following guy because you’re down by a touchdown and a field goal? I hate Machado as much as the next Brewer fan, but come on. I guess I shouldn’t be surprised. Texas is after all the team who still probably holds a grudge against Jose Bautista for ending their playoff hopes in 2015. 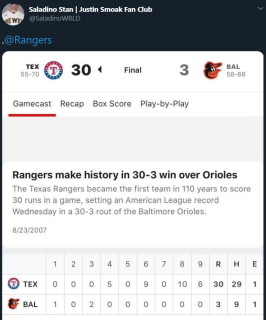 What makes me angriest of all? Padres manager Jayce Tingler not defending his guy in the post game press conference. “Were not trying to run up the score or anything like that.” What a loser way of thinking. This isn’t bar league softball or little league for crying out loud. Tingler should be fired immediately for being such a muppet.  Defend your guys at all costs.